Smith Cogeneration Dominican Republic Power Project is one of the world’s first and the largest floating platform combined-cycle power plant. This innovative use of GE technology has allowed the Dominican Republic to quickly and efficiently increase its power generation. The facility is designed to produce 185 MW of power.

The combined-cycle plant was built in two phases: Phase I, or the simple-cycle phase producing 85 MW of electricity, was built on a platform in Houston, Texas and floated to its permanent mooring in the Dominican Republic. The platform was delivered on a heavy-lift ship to the Dominican Republic approximately six months after construction began. Phase II, or the combined-cycle phase, began commercial operation on January 16, 1996. At that time, the plant output increased from 85 MW to 185 MW with a heat rate of approximately 8,000Btu/kWh.

Smith Cogeneration, in conjunction with a partner, is performing operations and maintenance of the facility under the terms of a 20-year Power Purchase Agreement. 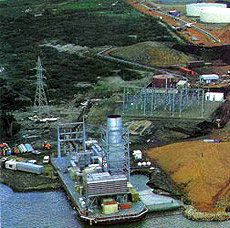